UGI Utilities will spend more than $265 million in fiscal year 2021 to replace natural gas mains and associated facilities, as well as complete a number of system enhancement projects. UGI has already completed approximately 69 projects of varying length in fiscal year 2021, which began on October 1, 2020.

“UGI remains committed to enhancing the safety and reliability of our 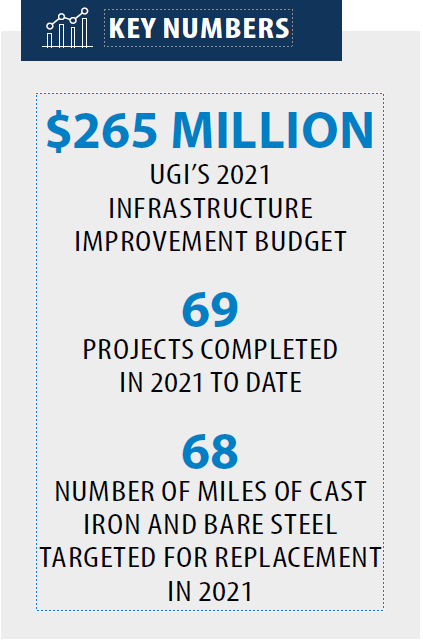 infrastructure,” Tim Angstadt, UGI Vice President of Operations, said. “These infrastructure projects ensure our system provides safe and reliable service for UGI customers and for the many communities we serve.”

Approximately 68 miles of cast iron and bare steel mains are targeted for replacement in UGI’s current fiscal year plan. The new mains will be constructed of contemporary materials such as high-density plastic or protected steel. These infrastructure replacement projects are complemented by a number of UGI capital projects such as pressure reinforcements to improve system reliability, service line and meter replacements, and regulator station improvements.

UGI’s infrastructure replacement plan prioritizes projects based on a variety of factors. Since 2011, UGI has retired nearly 600 miles of noncontemporary pipelines.

Visit www.ugi.com/projects-initiatives/ for a list of scheduled infrastructure projects, along with their status. This site and list are regularly updated; projects completed in the past six months are also included.